Meet Rina Sawayama, the Japan-born, British singer/songwriter heralded as the UK’s latest pop tour de force. So much so that her debut album has earned her top billing on Sir Elton John’s 2020 playlist.

We caught up with the rising star in London, just days before her 30th birthday, for her first Australian shoot as part of the next instalment of our Aje Insider series featuring Spring Summer 20’s ‘Impermanence’ collection.

A passionate storyteller and advocate for many of this year’s most pressing social movements, Rina’s music is shaped by her early experiences of cultural stereotyping and systemic racism. In short, Rina’s personal journey to the recording studio is as unique as her sound. After moving to Britain from Japan at the tender age of five, she majored in psychology, sociology and politics at Cambridge University, before setting her sights on song. Now, firmly walking to her own beat, the singer’s self-titled album SAWAYAMA is a wild collision of genre, blending electro-pop, opera, house music, nu-metal and R&B, while her lyrics spotlight autobiographical struggles with identity, diversity and equality. No wonder she’s The Rocket Man’s vote for 2020 album of the year. 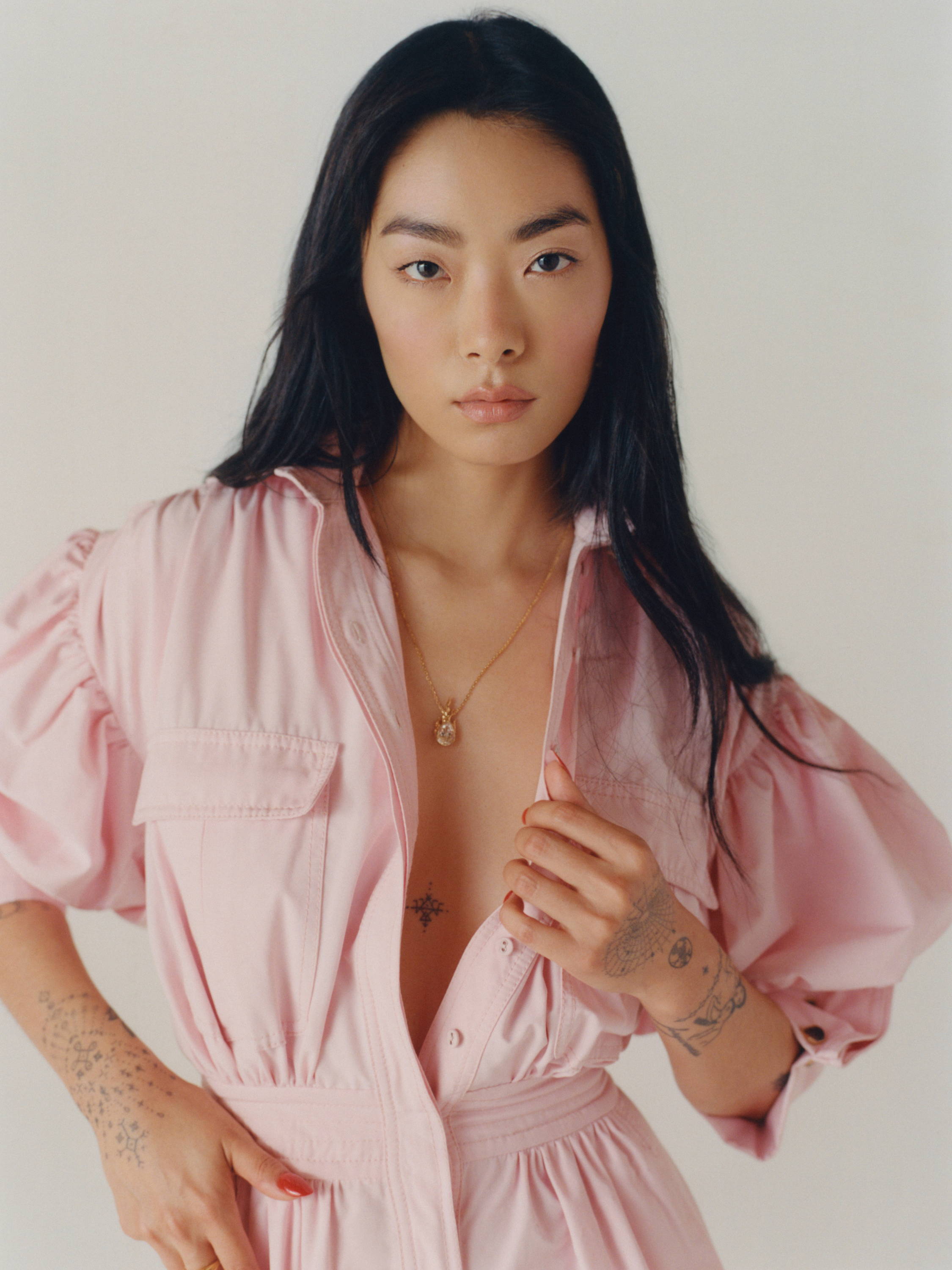 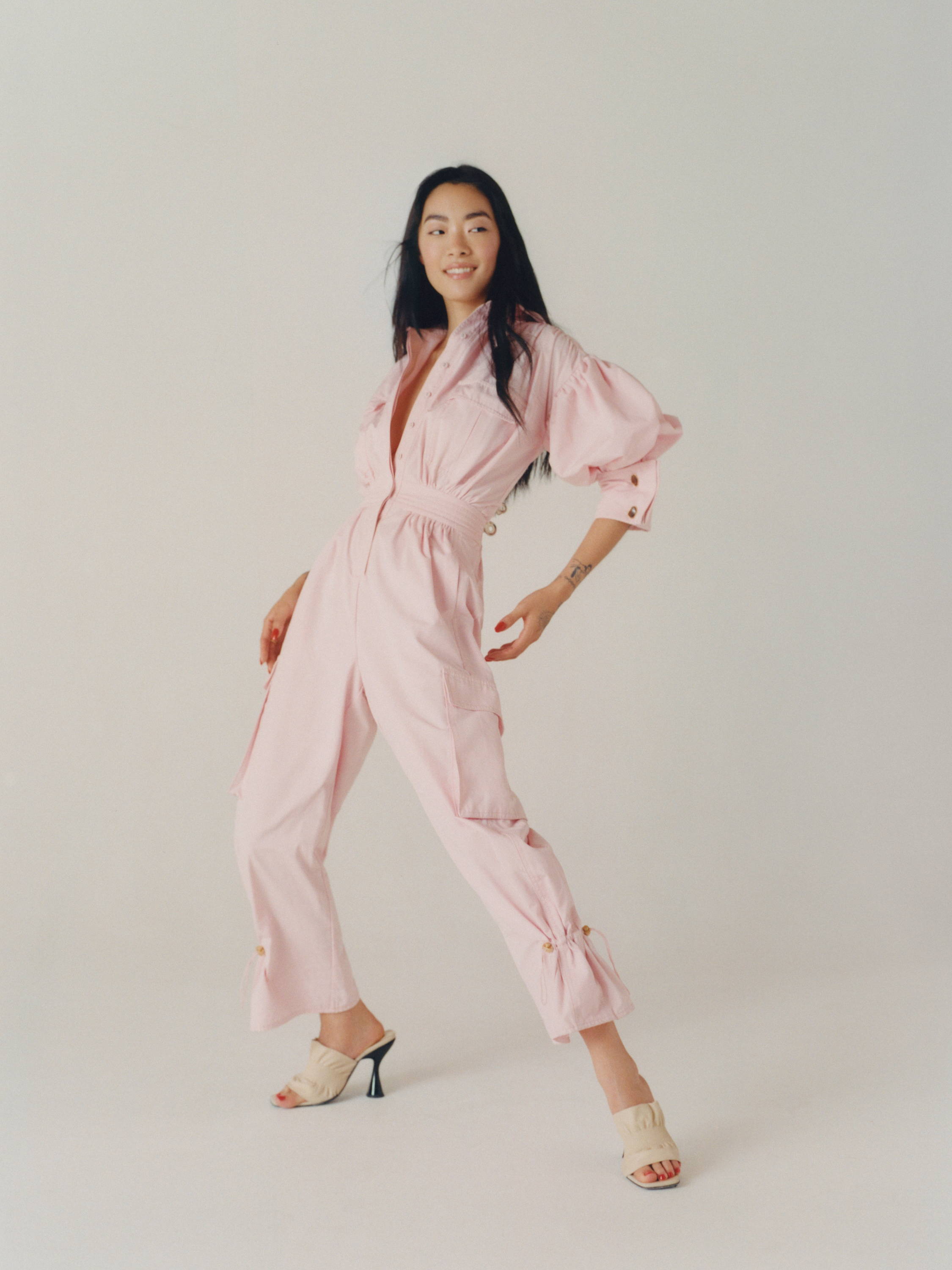 “I grew up on a mix of pop music from Japan like Utada Hikaru and then pop, rock, and indie in my teens when I went to an English speaking school. When I think about it like that, it’s no wonder the album came out with so many different styles.” 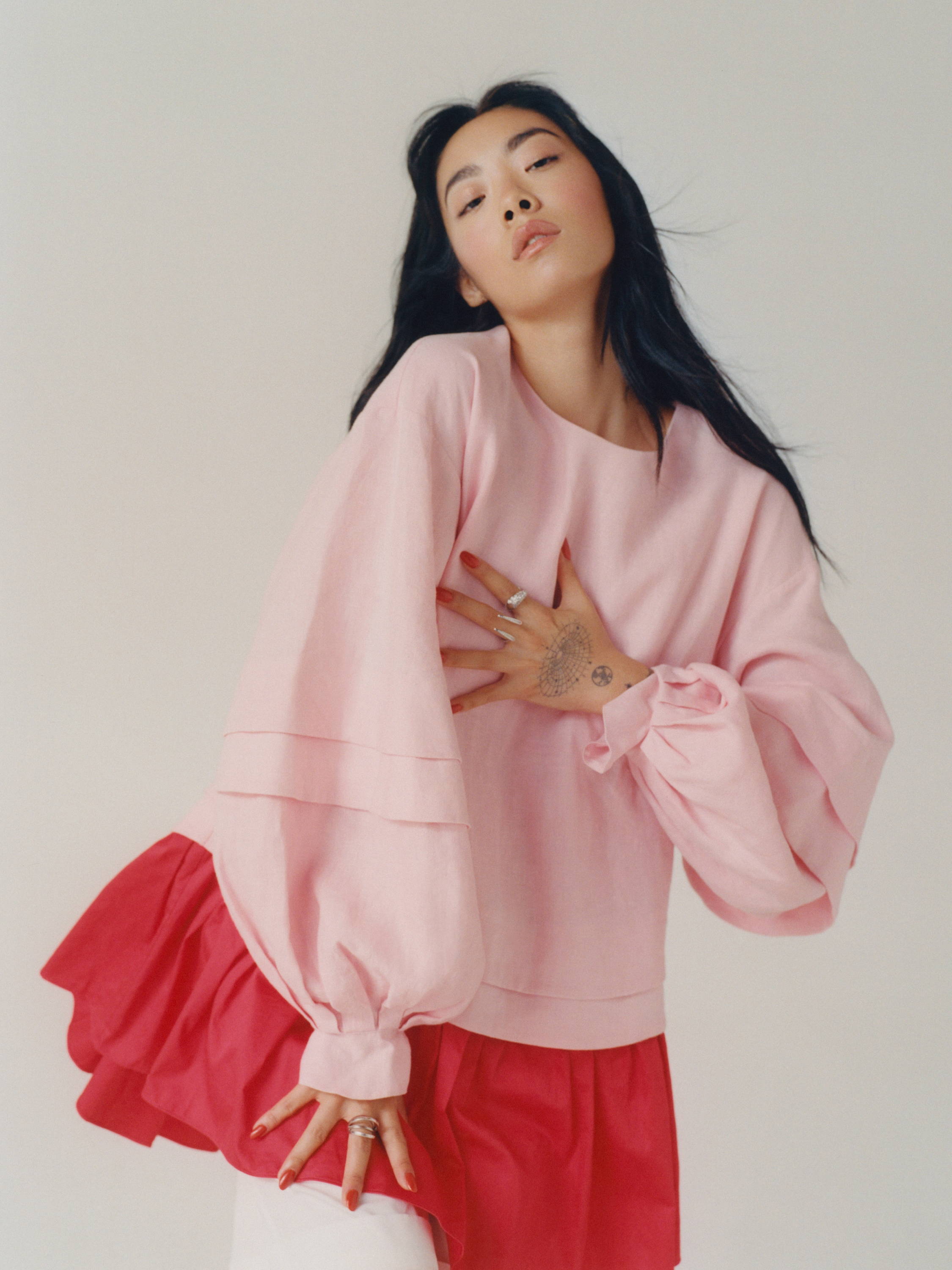 How did it all start? Have you always been compelled to write music?

I wouldn't say always compelled to write music. As long as I can remember I've been compelled to sing. I grew up on a mix of pop music from Japan like Utada Hikaru and then pop, rock and indie in my teens when I went to an English speaking school. When I think about it like that, it’s no wonder the album came out with so many different styles, literally at the same time as listening to Britney [Spears] I also loved The Bravery (I mean I was obsessed, I went to all their gigs). Writing came around then, late teens, early 20s but I felt most confident writing when I got to this EP that I did with Clarence Clarity and Justin Tailor. That felt like I was writing with a purpose. 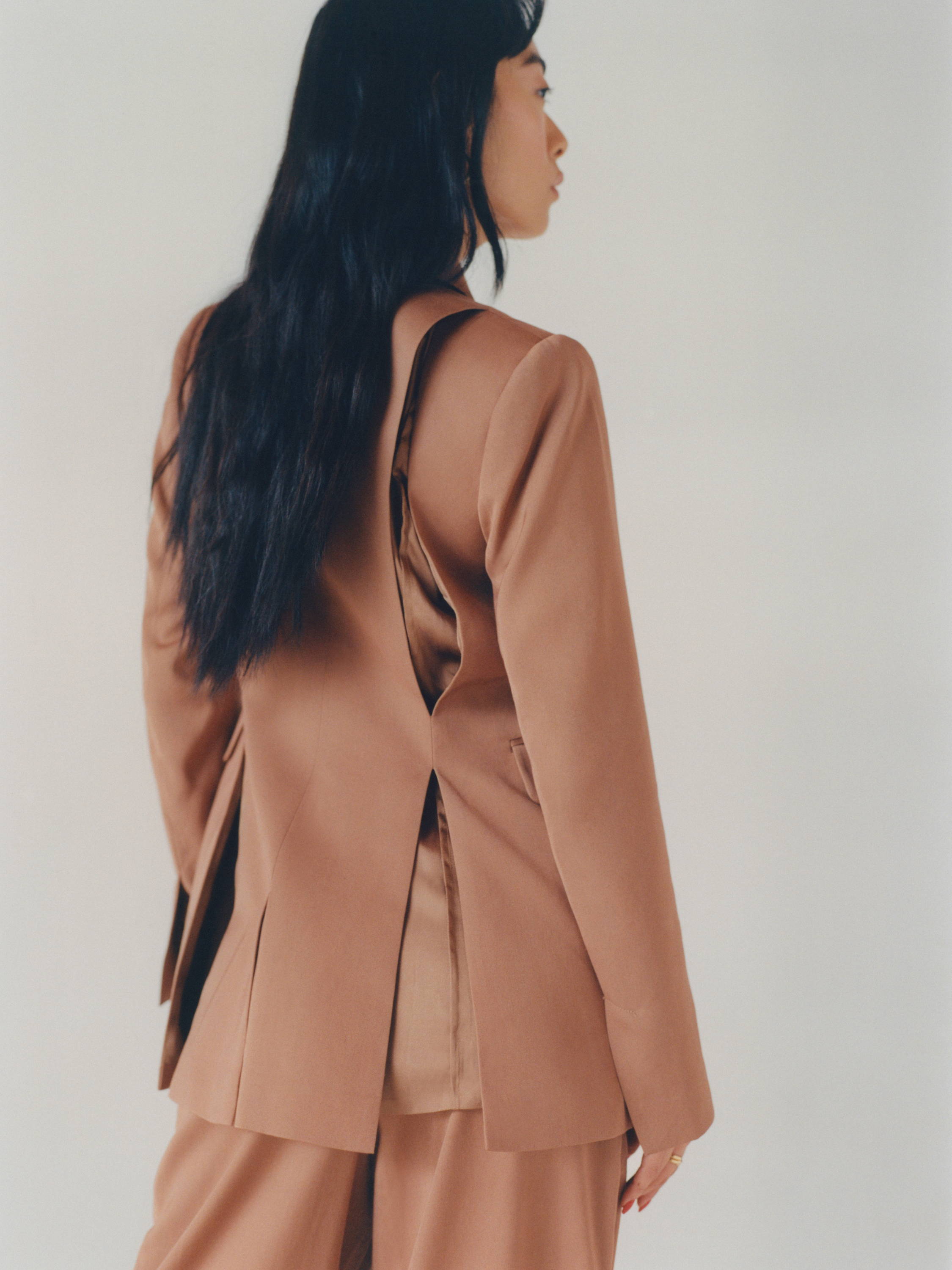 The Absolute Blazer and Absolute Pant 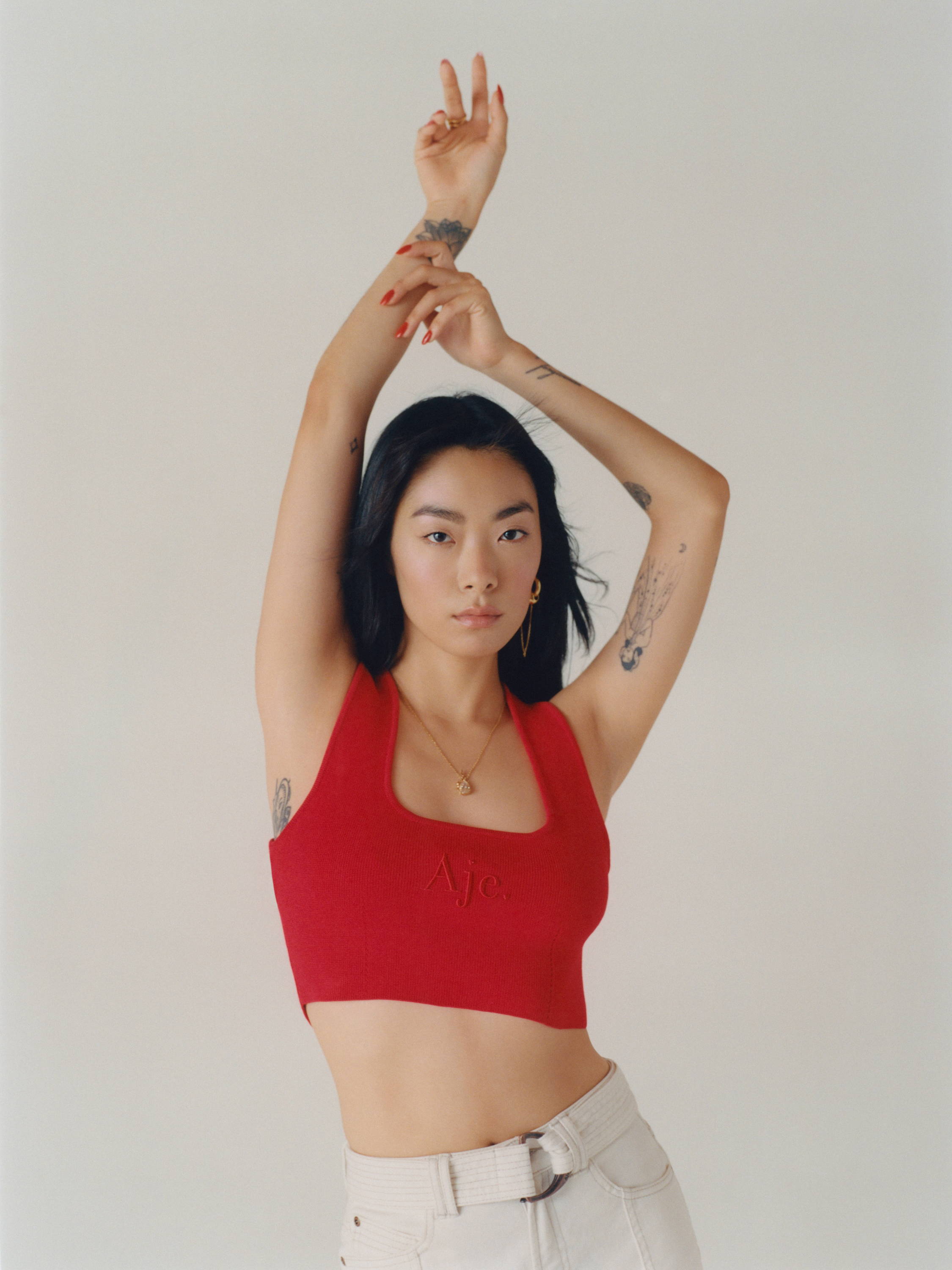 You’ve been so open about channelling your personal experiences into your songs, especially speaking out about cultural and racial inequalities and limitations. Is it daunting to share such profoundly intimate experiences through your music?

Oh definitely! Its f*cking terrifying. Ha! The album especially went into a lot of detail about personal trauma and familial pain in my life so I was mainly concerned about what my parents and then extended family thought. I was actually quite emotional when they said how much they liked the album. In my head I just hoped they could see the honesty and care behind talking about these experiences through music. When it comes to the racial and cultural inequalities, I'd say it’s predominantly channelled through the song STFU! That's much broader than just my own life. The process of that video was cathartic because I came ready with so many moments that not only I felt, but also so many of my POC friends. 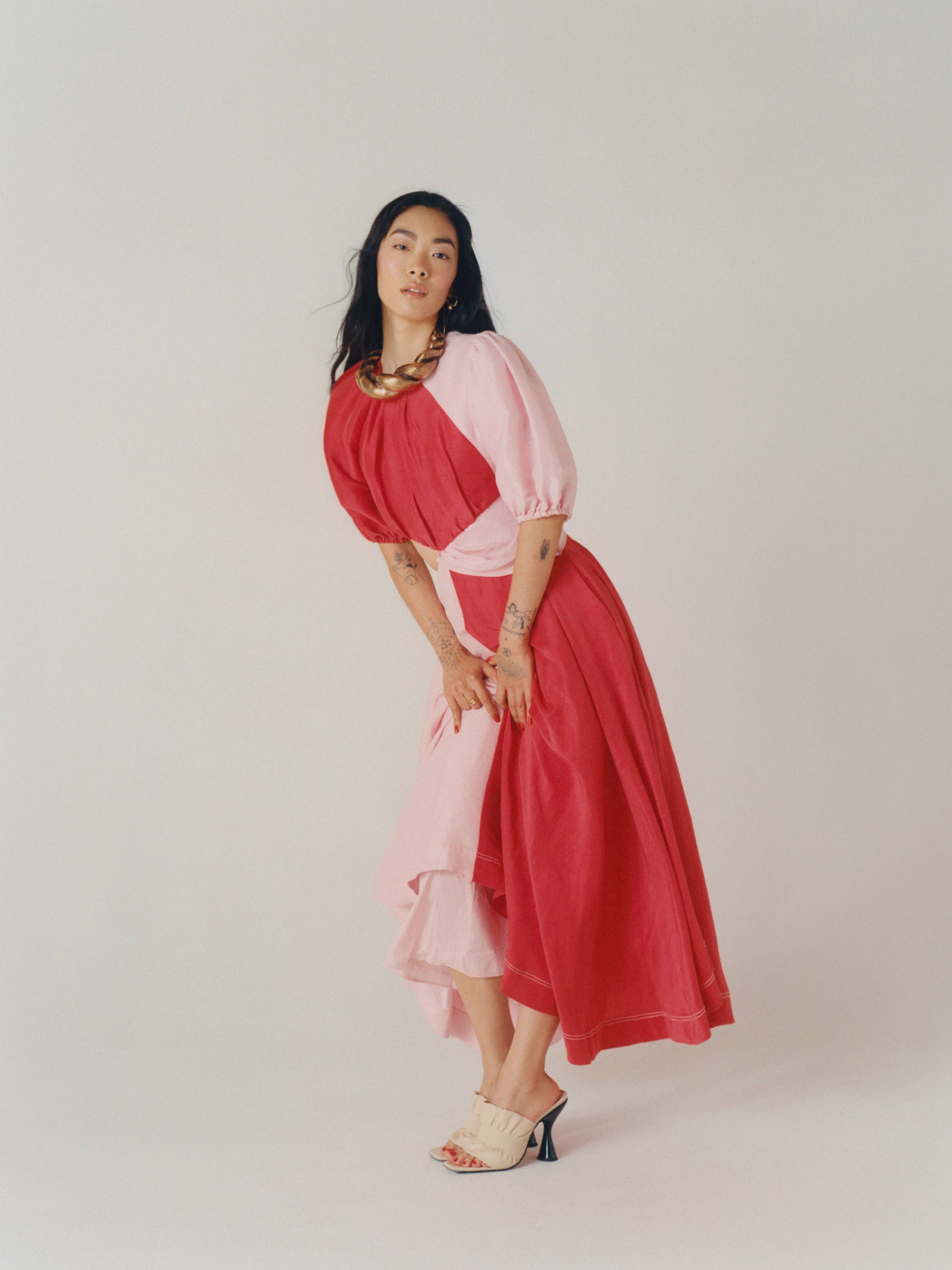 Do you feel that sharing this authenticity of your experiences is the key to good songwriting?

Definitely. I don't think I've released a song that hasn't felt authentic to me. To that point though I'm not the kind of person who can shut off from everything and just come out the other end with a record written. I love listening to other people and talking through concepts. For example I've recently gotten back to writing which has felt tough with everything going on in the world. There's a communal pain going on that is interesting to delve into for some I’m sure, but it just doesn't feel like the right time for me, so I've taken a step back to read, watch films, documentaries, talk to friends etc to help work out what the next direction is. It has to be authentic, but it also can't be rushed. 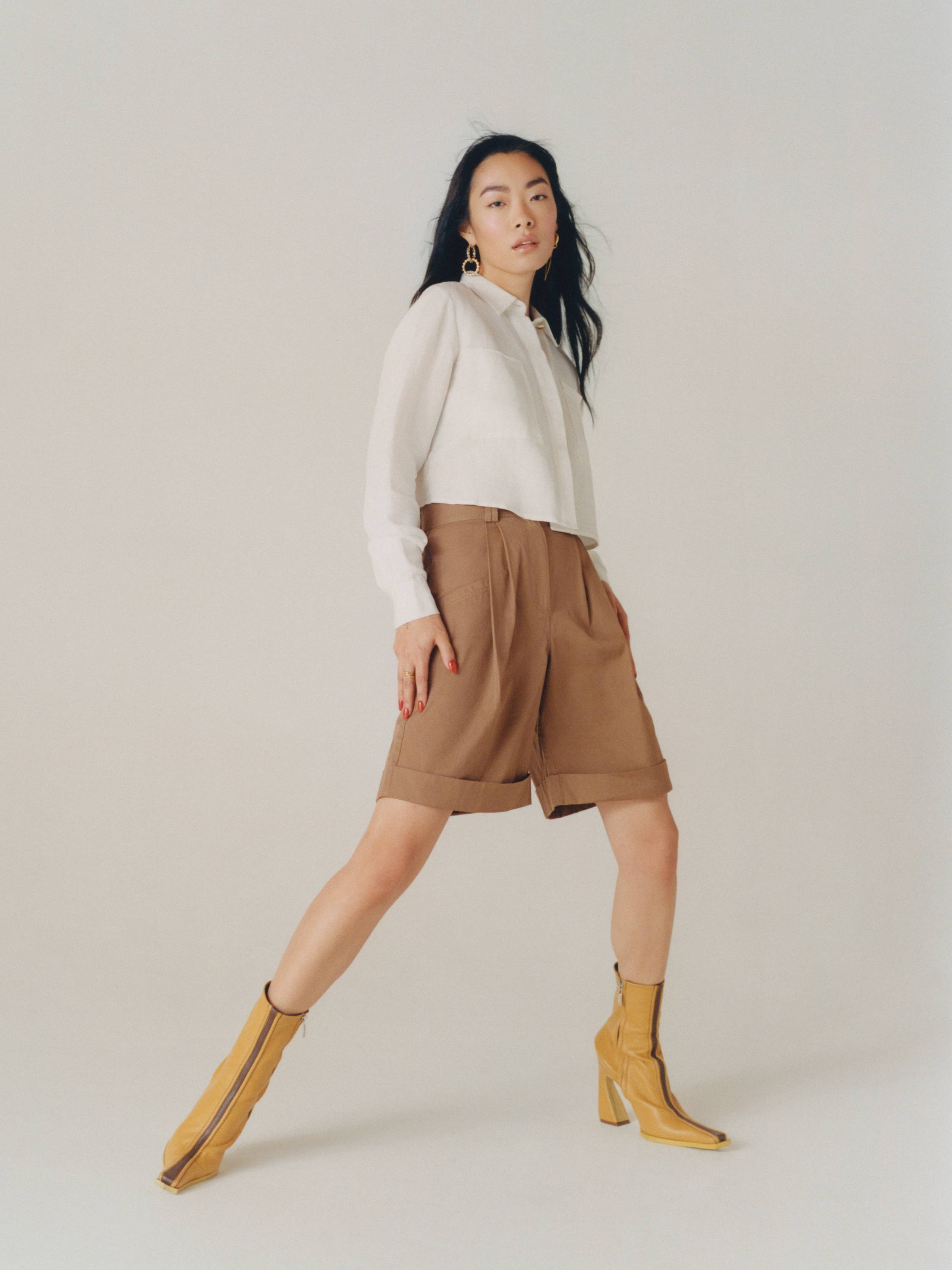 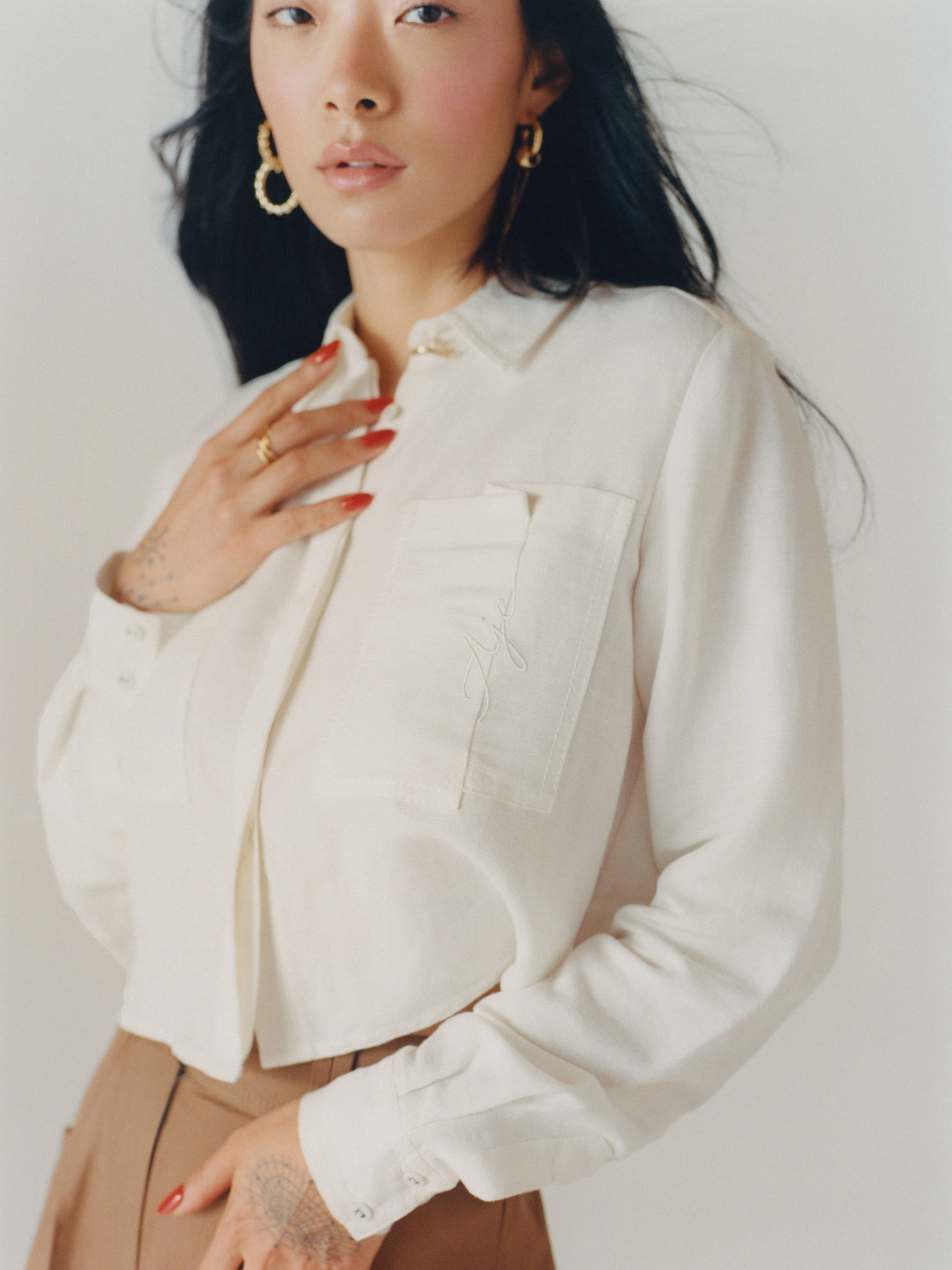 “I think when I was younger I was definitely more self-conscious, maybe wanting to portray a certain projection of an image. Now I'm 30 it’s a bit like 'f*ck it' lol - I know myself so much more now.” 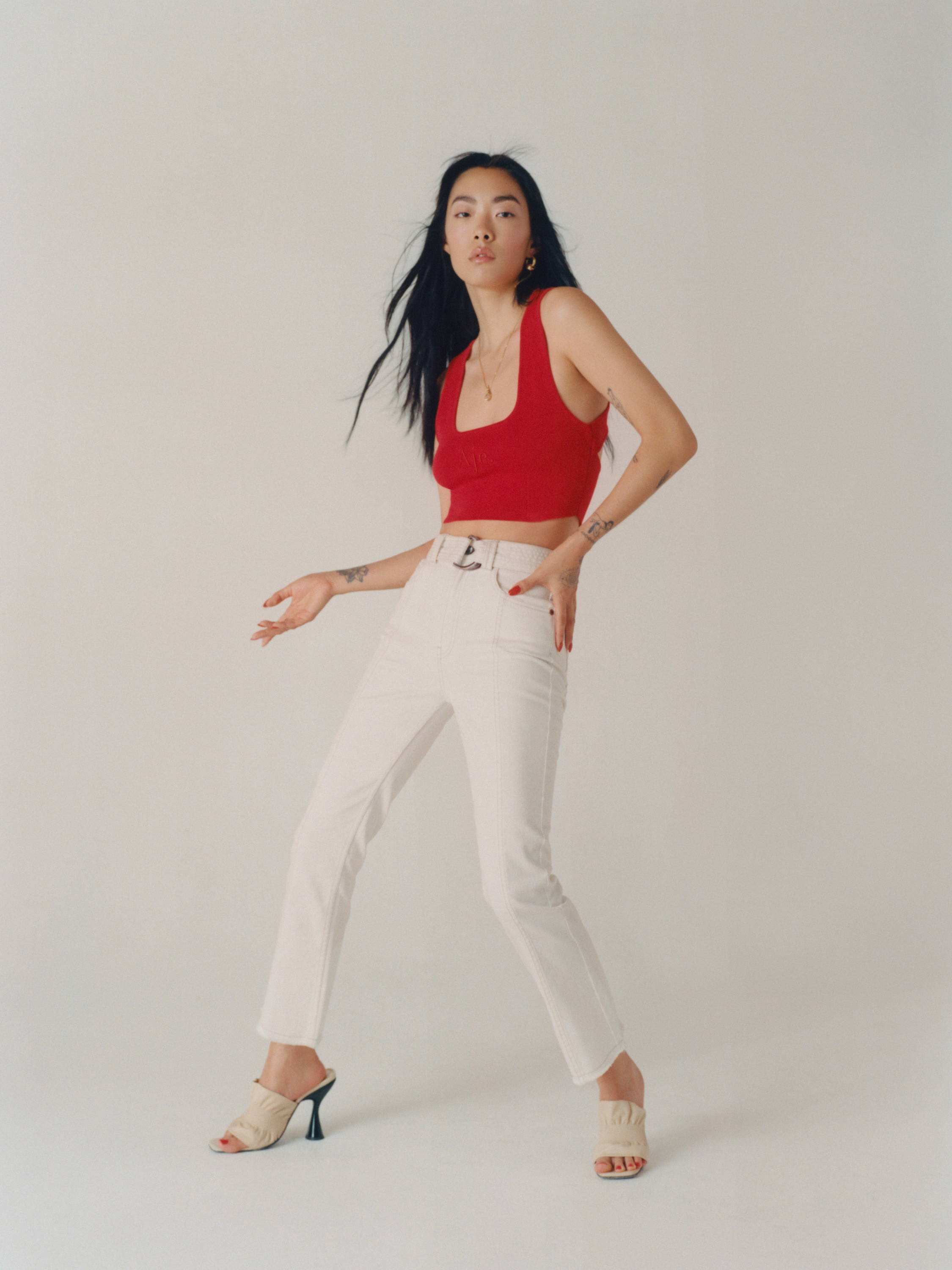 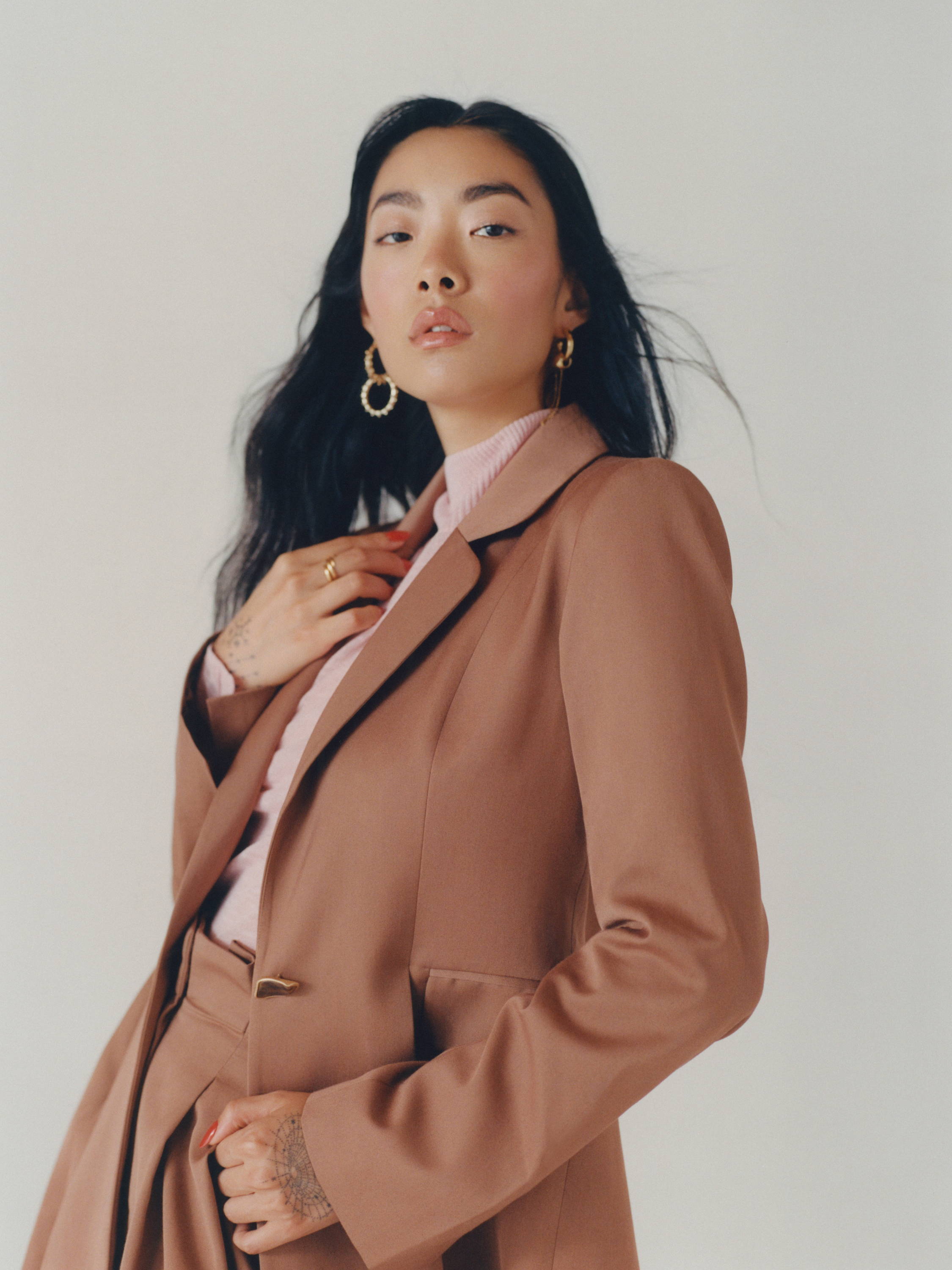 What does bravery mean to you?

I guess just being honest, sometimes that can be really hard in music or interviews. I think when I was younger I was definitely more self-conscious, maybe wanting to portray a certain projection of an image. Now I'm 30 it’s a bit like 'f*ck it' - I know myself so much more now.

From a style perspective, what are you currently cherishing?

I love my red knit crop top from Aje - more casual looks for sure as there's not many or any events on at the moment. I'm wearing a lot of pyjamas to be perfectly honest as well as sweats.

Sign up to receive free shipping on your first order and be the first to hear about the latest drops, offers and Aje Insider musings.